Last night we got a link to a Kickstarter project reward that we’ve helped fund for Glenn Crytzer‘s Savoy Seven, a line up, with 1 trumpet, 2 reeds, and a 4 piece rhythm section.  Uptown Jump is an 18 track album full of wonderfully danceable tracks, from Blues to Balboa passing through the wide world of Lindy Hop. 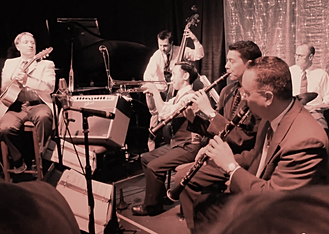 “The Road to Tallahassee” is a 95bpm song that would be equally at home dancing the blues or a nice smooth Fox.  There are touches of humour on songs like “Smokin’ That Weed” with a great call and response between Glenn and his Savoy Seven, which brings to mind songs like “The Grass Is Always Greener (if you’re high)” and this catches on when dancing to the song (albeit in the living room!) – we couldn’t get the smiles off our faces from such a boucy tune!

At about 212bpm, “Mrah!” is a comfortable speed for Balboa and has some lovely changes in energy that can mark the jump from PureBal to Bal-Swing and at 135bpm, “Downtown Slump” has everything you need for some smooth triple-stepping and breaks and rhythms to play with your musicality as well!!

All in all we’ve got to say that this is one of the most danceable albums we’ve heard in a looooong time, even if things do get a little crazy with the 320bpm “That Zombie Music“!!!  Our living room changed into the Savoy for a time while we were dancing through the tracks – they really do give you a feeling of being dragged back in time to the 30s and 40s amd a golden age of swing.

From such a wide selection it’s difficult to choose just one song… but we’ve decided on “Glenn’s Idea” (and haven’t ruled out using other tracks for future songs of the week!!!) for it’s pure bouncyness and playability on the dancefloor.  Unfortunately, because the album hasn’t been released yet we can’t add a link, but here you can find the Savoy Seven’s debut album, Focus Pocus, on Bandcamp…. just listen to “A Case of the Blues” and let your blues drift away <3 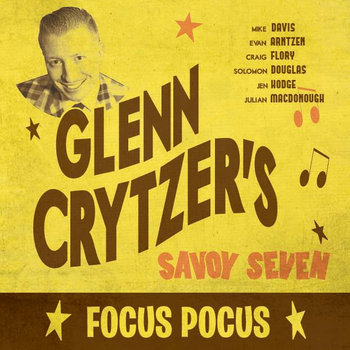